School counselors understand students may “awfulize” (using Albert Ellis’ term) a situation, making it more terrible than it is  So can adults. Kelly Dunn shares a story of how thinking differently about an issue can bring it to a screeching halt. 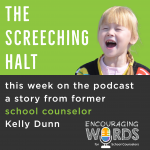 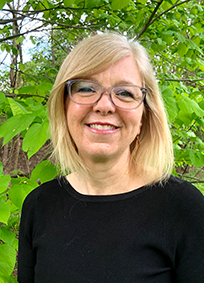 Kelly Dunn is a former Indiana elementary and a middle school counselor as well as a licensed mental health counselor. Kelly is the facilitator of RAMP Ready, a new online program from Inspire Success offering multiple ways for K-12 schools to learn about the ASCA National Model and become a Recognized ASCA Model Program (RAMP).

Matt Fleck:
Hello, all! Welcome back to Encouraging Words for School Counselors –  the weekly, five-minute mini-podcast of stories from school counselors about school counseling. I’m Matt Fleck with Inspire Success.

We have mentioned several times this school year that little things can sometimes make a big impact. This week though, a little different take with a story about some things that may appear big, but aren’t. Inspire Success’ Kelly Dunn, who was an elementary and middle school counselor for many years, says sometimes we make things bigger than they need to be, a maxim illustrated quite nicely by an ear-splitting encounter Kelly had with one of her five-year old kindergarten students.

Kelly Dunn:
Her communication was slightly delayed, which isn’t unusual really for kindergarten, but she would get frustrated in class and would just start screaming at the top of her lungs, just screaming, solidly, just not stopping. So as my job, as a counselor, I had to remove her or they would bring her down to me from the classroom to my office. And the first couple of times this happened we ended up calling her mom, because that’s what had been done before. Our principal — who was great — he really didn’t know what to do or how to handle it, so he would end up calling the mom and the mom would come and pick her up. In the meantime, the speech pathologist and I had talked because, of course, she worked with the student, too. And she was the one who explained that, you know, the student had some communication delays. And really the two of us were thinking that it was really a matter of this little girl getting frustrated in class when she had to do something, maybe she didn’t understand, or she couldn’t clearly explain herself or express her emotions. And so she would scream because that was her limited mode of communication to let everyone know she was frustrated.

Matt:
Frustration was definitely the by-product. The child’s mother had taken her daughter to be evaluated and they were discussing the possibility that she may be bipolar, but the school’s speech pathologist and Kelly said, let’s wait a minute. This may not be as big an issue as it seems.

Kelly:
So the next time she came in again, screaming, I had to bring — they had to bring her down to me in the office chair with wheels on it, and brought her to my room. I just let her scream. And I just sat at my desk and worked and let her know, you know, you know, whenever you’re done, you’re ready, you know, we can do something else or do an activity or whatever you would like to do. Of course, she just continued to scream.

Matt:
The media specialist in the next room, teaching a class, knocked gently on Kelly’s door, just to check to make sure everything was okay. Kelly assured her, everything was fine. Even though the screaming continued.

Kelly:
At one point, the little girl was, like, taking off her shoes, throwing her shoes, taking off her socks, throwing her socks. I just continued to work and reassured her that everything was fine. You know, she could scream as long as she needed to, and that I was here and that whenever she was ready, um, to stop screaming, that would be fine too. And so finally she just stopped. And so I asked her if she would like to play a game or do something and she chose to play a game, so we did. We got a game out and started to play and she calmed down. And, you know, we kind of talked about, gosh, that was pretty serious. It seemed like, you know, you were really upset about something. And once she calmed down and had a chance to kind of acknowledge her feelings, then she went back to the classroom and she was good.

And I will tell you that the rest of the school year, I didn’t have any more episodes. I was seeing her in the lunchroom and would always kind of check in or wave and see her, but we never had to call her mom to come pick her up again. You know, she never had to leave the classroom to come to me for any huge outbursts like those anymore. So I think, again, it was just a matter of stepping back and thinking about, you know, what was, what was going on and not making it into a huge deal, not having to diagnose or figure out it was something bigger than it really was.

Matt:
The student had learned a behavior to deal with her frustration that was highly effective. Even if it bothered everyone around her.

Kelly:
She made that connection between “I could have this huge outburst” and “then I could go home,” and whatever was frustrating her in the classroom, she didn’t have to deal with it. And whatever work was being asked of her, she could, I don’t want to say, get out of it. But that was the only way that had worked for her was that she could be taken out of the classroom and then go home. So we were able to kind of break that routine and start a new routine.

Matt:
I bet the teacher and the counselor and the principal all loved you after that.

Kelly:
Yeah, I was kind of like the miracle worker, I suppose. Not really. I felt like I was! I thought it was a huge win.

Matt:
Have you had a situation similar to Kelly’s? Drop us a note if so. We are always on the lookout for stories of YOUR experiences to share with others. And especially now, as we wind down the school year, we’d love to hear stories related to prom or graduation or another story related to the end of the school year. Send me an email at matt@inspiresuccess.org or the light is always on at our online soundbooth at inspiresuccess.org/soundbooth. I know it’s “one more thing to do” but we believe these “encouraging words” are exactly what’s needed to get us through each week.

So thanks for sharing. Thanks for listening, too. We’ll see you next week.