The work of school counselors is often compared to planting seeds. If we’re lucky, we occasionally get to share in the results of our hard work as Stephanie Brinsley did this spring. 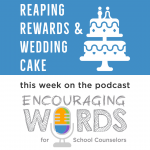 Stephanie Brinsley taught kindergarten and 1st grade for 8 years before becoming a high school counselor at Irvington Preparatory Academy, where she has been for 15 years. Stephanie is happily married with a 9-year old son and 6-year old daughter.

Matt Fleck:
Well, it’s May, almost the end of the school year for most of you, and I’ll bet you could use some Encouraging Words for Schools Counselors. Thanks for joining us everyone! I’m Matt Fleck with Inspire Success.

No matter what grade level you’re at as a school counselor, it can be so gratifying at this time of year to see some of your current or former students graduate. It can also be an anxious, nail-biting time for high school counselors with one or two or more students who are down to the wire, those you’re hoping like heck are going to finish everything or pass their last remaining classes so they can graduate.

Stephanie Brinsley from Irvington Preparatory Academy, a K-12 charter school in Indianapolis, had a particularly challenging student like that years ago. He was the oldest of four boys from a family that had recently moved into the school district.

Stephanie Brinsley:
When we got the kids, they had just lost a brother to drowning. So, you definitely had the grief of that. And then the parents’ marriage was in the middle of crumbling, and so we were trying to support the boys through that. He was struggling very much just academically and behaviorally. And he was one of those kids you could see could go either way. You want to save them all, you know, and you try your best, but this is one we just invested so much time in, with he and his family. He wanted to play basketball and so that was a good motivation for him because we had to work with him, getting his, making sure he was eligible, so he had a motivation there. And so, it was just little things along the way. Even, getting meals between school and practice, and we just spent a lot of time on those boys because, I mean everybody deserves it, but they just truly needed it. And again in the back of our minds the whole the time was, “he’s the oldest, whichever path he takes, the other three are gonna follow.” And it was so important for us to get him graduated so the other boys could see, yeah, if he can do it, I can do it too. And they did.

Matt:
Just last week, Stephanie was reminded of this student because she was attended the oldest son’s wedding. It was a delight, she said, to see the continued success of her former student.

Stephanie:
The other thing that was fun about going to the wedding is that the crew of kids he graduated with, they’re all still friends. So they were all at the wedding, too. So they were all coming up and hugging and saying, “Oh, it’s so good to see you!” And then they were saying their own stories of, oh I remember when you did this or thank you for this, this got me through. I mean it was just a wonderful experience. And the first time in my career that I had ever experienced that. Wonderful. It was wonderful.

Matt:
Though many of us still bump into former students from time to time at the grocery store or a football game, counselors don’t often get to participate in a former student’s adult life. But every once in a while we get to see that our hard work paid off.

Stephanie:
You know as a counselor you don’t, it’s so much about planting seeds. You don’t get to see the fruition so much, but then maybe when they walk across the stage as a high school counselor, that is an accomplishment. And I think, you know working with kids, we know all the work that went into it. Even more so sometimes than the parents. Because we’re the ones pushing, pushing, pushing, and so that is a huge thing. But then again, to years later, to get invited to the wedding and to be able to meet his new wife and to see his parents again. ..It was just wonderful, like I could cry now just thinking about it. It was really nice. It’s one of those experiences that I’m so grateful for and I hope everybody gets an opportunity to do at some point.

This podcast is only possible when you listen, but also when you share your stories of being a school counselor. So thanks. Be sure to check out past podcasts on our website at inspiresuccess.org/podcast and remember to subscribe to the Encouraging Words for School Counselors podcast on your favorite podcast app.

Good luck wishes to you as the school year winds down. We’ll be here next to support you all the way. Until then, have a great week.