Jan Desmarais-Morse has worked as a school counselor for more than 30 years and is a former state school counselor of the year. But in this week’s Encouraging Words for School Counselors podcast, Jan shares how finding ways to combat childhood sexual abuse is a never-ending challenge.

Jan Desmarais-Morse has been in education for 34 years, teaching for two years before becoming a school counselor. Jan has served elementary and middle school students in Maine and Indiana and just completed her 25th year at Goshen Middle School (now Goshen Junior High). She has trained rising school counselors as an Associate Instructor in the Counseling and Human Services program at Indiana University South Bend.

Jan enjoys spending time with her four grandchildren. She longs to return to international travel when the world safely opens up again. 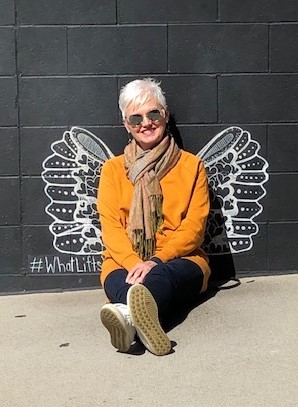 Matt Fleck:
Hi, everyone. Welcome to a new school year AND a brand new collection of Encouraging Words for School Counselors podcasts. I’m Matt Fleck.  We are so thankful for the generous underwriting support of Lilly Endowment for the podcast and the sponsorship of Inspire Success – the nonprofit that helps schools develop and implement a comprehensive counseling framework through the RAMP Ready online learning system.

Just a few weeks ago, at the ASCA national conference in Las Vegas, Jan Desmarais-Morse was attending a session where they asked everyone in the audience to stand, then one by one participants were asked to sit down according to how many years they had been a counselor. Jan said it was a total surprise to be the last person standing. She was the longest serving school counselor in her session!

It has been more than 30 years ago that Jan graduated with her school counseling degree in Massachusetts. Then she moved to Maine to take a school counseling position – only to find out when she got there that Maine required her to take four additional classes that summer in order to be licensed in the state.

Jan Desmarais-Morse:
I was so irritated when I was taking a class in the summer because I had just graduated with my master’s degree and one of the classes they required that I take was called Intro to School Counseling. And I was like, what the heck? I just got my degree in this. Why are they making me take this intro class? And I say that this particular class changed the course of my career. I told you my program was very traditional. The person I did my internship with in Massachusetts, you know, he was one of those coffee-drinking, bon-bon-eating school counselors who sat in his office.

So, when I took this class, the professor started talking about developmental counseling. And talked about individual counseling, small group counseling, classroom lessons, and how, you know, small group and classroom allows you to hit more students at one time. And it just shifted my entire way of looking at what school counseling was and having been a teacher and being elementary trained, it fit into who I was. And it just made so much sense.

Matt:
But like most of us, even after receiving her masters degree and completing the additional classes, Jan learned there was so much she didn’t learn in school — particularly in the area of childhood sexual abuse.

Jan:
I remember this one boy who was in sixth grade and his sister was a fourth grader. And his stepfather had been sexually abusing his sister for quite a while. And that came out and I watched her and I worked with her and got her connected to services. But I watched the agony that this young boy felt because he felt he was the man of the house and should have protected his sister and it just broke my heart to watch all of that. That was my first experience with that.

Jan:
In the fall, we had just opened a new addition to our building and our custodian had his new office space downstairs in a basement area where his previous office had been in the midst of the hallway where the kids were. And I went to school one day, the year before, and my principal said, Jan, you’re not going to believe this — you’re not going to believe which person got the most upset about where their space is going to be. He’s so upset that he’s not going to be in the midst of all of the kids. And I was like, well, that’s kind of weird, you know? And, um, and then that fall, there were kids. I walked by the doorway where I could hear kids in the basement where his office was. And I meant to tell my principal, you know, you gotta watch out, there shouldn’t be kids down there, you know, liability, blah, blah, blah.

Matt:
The next school year, just a month after Jan had moved to a new state to work at a new school, her brother called to tell her that the custodian at her former school, the man the kids called the hugging janitor, had been arrested for abusing students in the basement of the school.

Jan:
And I just, oh my gosh, it was like a stab in the heart because I knew something was funky, but I didn’t know what it was. And it was not in my realm of thinking that that would be happening, but I knew something was off. And I had talked to my principal about it, but it was just, you know, it was off.

Matt:
Jan says consistently interacting with students over time, providing classroom lessons on inappropriate touch, and working to establish trusting relationships with students, all help. But even in this school, Jan had taught an extensive eight week long child sexual abuse program with kindergarten, first, and second graders and even that wasn’t enough.

Jan:
That fall. I had kids coming to me and saying, Ms. DM, you need to talk to so-and-so. You need to talk to so-and-so. And I’ld say, why? They’d say he needs to talk to you about something. I was like, okay. So I pulled him in because I was only in this building a day and a half a week. And I pulled him in and I said, Hey, I heard that you want to talk to me about something. I said, I heard, I’m told that you saw something, you know, what is it you want to tell me? And he said, Ms. DM,, I can’t tell you. And I said, why can’t you tell me? He said, I like you too much to tell you.

Matt:
Jan had known this student for three years and felt he was protecting her in some ways, but she also believes he was the student who finally told school authorities that something bad was going on. That experience and, sadly, several others have helped Jan better hone her skills of identifying student sexual abuse issues. But nevertheless, there’s only so much counselors can do.

Jan:
The only thing I can do is build a relationship, be in the classroom, talk about safety and personal boundaries, and be consistent. I think being consistent is the most important piece because if kids — if you’re not consistent, then kids can’t trust you. So just building that relationship and being consistent and being present, and then when they’re ready, they will tell. That’s all I can say; there’s no trick.

Matt:
We appreciate Jan sharing HER story with us and welcome YOUR stories of what you’ve learned over the years as a school counselor or student services professional.

Go to our Encouraging Words for School Counselors podcast website and click on the online soundbooth link to record your story in the comfort of your own home. Or send me an email saying you’d like to tell your story — to matt@inspiresuccess.org

Thanks for listening, everyone. We truly look forward to hearing YOUR stories soon. So join us again next week.