We start our November Sharing Thanks series with the touching story of a six-word note that Bruce Bushnell received from a student years ago. Though it was a short note, it meant the world to both Bruce and his student. 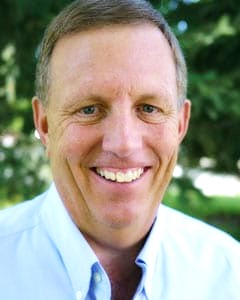 Resources Mentioned in this Episode

November kicks off the busy holiday season – as if you weren’t busy enough already – but it’s also a month to remember to be grateful. To help us remember, we’re asking listeners to share stories about a special note or card they received from a student or parent and to tell us WHY the note was meaningful. And to kick off our Sharing Thanks series we’ve reached into our archives for today’s story from Bruce Bushnell, a former high school counselor at Pleasant Grove High School in the state of Utah who received a simple, six word note from a student that totally perplexed him.

Bruce Bushnell:
A young lady came into the counseling office and she, uh, handed me a wrapped present and gold wrapping with a gold ribbon. And she got all emotional. She had tears in her eyes and she handed me this present. And I thanked her. I said, but I didn’t recognize her. I don’t remember ever seeing her as a counselor. We do counseling presentations and teach things in the classes and run groups and individual counseling. I don’t know her name. I don’t recognize her. I said, I’m really touched by this. I didn’t know her name, but aren’t you getting me confused with another teacher, someone else? She said, no, she said, no, it’s for you, Mr. B. And I go, well, thank you. And then she left. I took it home and put it under our tree. And then in the morning we opened presents, came down and as a family we gathered and opened all these presents and I totally forgot I put her present under the tree. My daughter said, dad, there’s one present left for you. It was the very last present. We brought it out. It was way back underneath. And I brought up the gold wrapping and opened it up and it was a jewelry box. And then there was a card and the card was called Footprints in the Sand. And at the bottom of it, it said, “Thanks for saving my life, Angela.”

Matt:
It was an extremely touching note but Bruce had NO idea who Angela was. So as soon as the school opened up after the holiday break, he went to the central office’s picture book of all of the students. He finally found an Angela who he was quite sure was her and sent a pass to see her.

Bruce:
She came in, I said, Angela, I was really touched by your gift, but I’m also confused. Can you help me understand? I’m quite sure this is for someone else. I was touched. In the jewelry box was a little pin. I wear it on my suit as a reminder to really look out for students and care about students. But I said, I appreciated the gift and the card and help me understand because you know… This is what she said. She said my family has moved a lot. And we moved here to your high school. This is about our eighth or ninth move. And I have to start over again. And I’m having a hard time making friends. And my family has had a lot of challenges. And I won’t go into those today, but they did. They had a lot of challenges. And then she personally had a lot of challenges.

And then she said, you know, I came to the point this time that I felt like life wasn’t worth it. And she got all emotional again. And I got all emotional. I get emotional real easy. So I’m trying not to get emotional now because I haven’t told the story for a day or two. And, and uh, she said, I just wanted a sign that someone cared. Uh, sorry. She said, I just wanted a sign that someone cared. She said, two straight days, you came down the hall, gave me a high five, and said have a great day. But she said that what she felt like had touched her the most, she said on the third time, it was, I think it was a couple of days after that. But on this third time, when I came down the hall and recognized her, I came down and said, you know, I’m so glad you’re here. We need you, have a great day, and gave her a high five. And that’s the exact words she said back to me. She said, I knew without a shadow of a doubt that someone cared, that you cared. And that was the sign I was looking for.

Matt:
Bruce is now a trainer for the WhyTry Program which has a phrase called “Surrendering the one-up relationship.” That is, acknowledging that some students see teachers and counselors as some sort of wisdom-filled authority figure and it’s tempting to use that to our advantage. But by “surrendering the one-up relationship” we allow students to see that we’re human, that we’re not a lot different than they are, and that we don’t have all of the answers. WhyTry believes that surrendering the “one-up” relationship is one of the most effective things adults can do to motivate students by building trusting relationships and conveying a simple message…

Bruce:
We believe in you. We care about you. We’re glad you’re here. We want you to be here and we’re going to support you. And we treat you with dignity and respect regardless. It’s not tied to behavior or achievement or failure. Whether you’re a member of the student council or the band or the dance group, or you’re the leader of a gang, that doesn’t change. Whether you get all A’s or all F’s, I care about you.

Matt:
Bruce, by the way, still wears the pin that Angela gave him years ago. We would love to hear YOUR story about a meaningful note you received from a student or a parent – and WHY it was special – during our Sharing Thanks initiative. And if we use your story we’ll give thanks back to you in the form of a special surprise PLUS a ten dollar Amazon gift card. All you need to do is first figure out which of your MANY thank you notes you want to share – and then – either share it with me at matt@inspiresuccess.org OR tell us about the note on our painless, online soundbooth at inspiresuccess.org/soundbooth. And at the risk of saying this word TOO much, thanks in advance. We’ll chat with you again next week. So long.